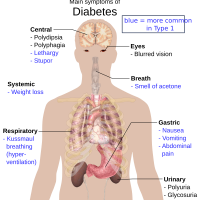 Diabetes mellitus is a disease in which the pancreas produces insufficient amounts of insulin, or in which the body cells fail to respond appropriately to insulin. Insulin is a hormone that helps the body cells absorbs glucose (sugar) so it can be used as a source of energy. In people with diabetes, glucose levels build up in the blood and urine, causing excessive urination, thirst, hunger, and problems with fat and protein metabolism. Diabetes mellitus differs from the less common diabetes insipidus, which is caused by lack of the hormone vasopressin, which controls the amount of urine secreted.

It is quite common in western and developing countries due to globalization leading to change in dietary intake and increase in the consumption of street food, which is characterized with excess sugar.

There are two types of diabetes mellitus which are classified in relation to insulin function in the body, whose common characteristics is an elevated level of sugar in the blood.

TYPE 1 DIABETES: called insulin dependent diabetes (IDDM) or juvenile diabetes. This occurs due to viral infection, toxin or an autoimmune reaction. In type 1, the body does not produce insulin or produces it only in very small quantities. In most cases, Type 1 diabetes is an autoimmune disease, that is, a condition in which the body’s disease-fighting immune system goes awry and attacks healthy tissues. In the case of Type 1 diabetes, the immune system mistakenly attacks and destroys insulin-producing cells, known as beta cells, in the pancreas. Scientists believe that a combination of genetic and environmental factors somehow triggers the immune system to destroy these cells. Scientists have so far identified 20 genes that play a role in Type 1 diabetes, although the exact function of these genes is still under investigation. Environmental factors, such as certain viruses, may also contribute to the development of the disease, particularly in people who already have a genetic predisposition for the disease. Type 1 diabetes also can result from surgical removal of the pancreas.

TYPE II DIABETES: also called adult-onset diabetes or non- insulin dependent diabetes (NIDDM). Its cause is unknown but it is exacerbated by a diet rich in sweets and refined products and poor whole grains. The problem with TYPE II diabetes is not the lack of insulin, but rather its excessive or inadequate secretion. However, this excess insulin is ineffective in metabolizing glucose, since body cells are not sensitive to it. Type II diabetics tend to be obese.

Also, symptoms characteristic of Type 2 diabetes include those found in Type 1 diabetes, as well as repeated infections or skin sores that heal slowly or not at all, generalized tiredness, and tingling or numbness in the hands or feet. Adult type II diabetics also rarely respond well to an adequate anti-diabetic diet.

Whether or not enough insulin is produced (type 1diabetes) or that produced is ineffective (type II diabetes), blood glucose level is elevated, causing a variety of mid and long term complication. Obesity, arteriosclerosis, cardiac disease, hypertension, kidney failure, and retinal disorders with vision loss are the most frequent complications of diabetes.

To avoid the complication of diabetes, your diet can deliver you totally with frequent blood glucose level control. Diabetics must be constant and careful with their diet for the rest of their lives.

The following foods help in controlling the blood glucose level which diabetics are advised to eat, which are:

POTATO:  Potatoes provide complex carbohydrates and fiber, which causes them to release glucose slowly during digestion. In controlled amounts, they are well tolerated by diabetics because they do not cause abrupt drops in blood glucose level.

AVOCADO: It helps in maintenance of adequate blood sugar level, reduces cholesterol and balances the fat composition in the blood all of which is particularly beneficial to diabetic.

ANTIOXIDANTS AND VITAMIN B:  These protect the cells from harm occasioned by excess sugar in the extracellular media (outside the cells) and its lack in the intracellular space (within the cell). Pro-vitamin A, vitamin C and vitamin E, as well as flavonoids, are the most effective natural antioxidants. Vitamin B1, B2 and B6 are essential for glucose metabolism by transforming it to energy. Because of this, diabetics must ensure a good supply of these.  Wheat, legumes and nuts are all good sources of these vitamins.

ONION: Onions help reduce blood glucose in cases of diabetes. They are also blood alkalizers and protect against arteriosclerosis, which are beneficial to the diabetic.

Foods to eliminate or reduce:

SUGAR/ HONEY: All dietary sugars with the exception of fructose, are formed partially or completely of glucose. This is easily absorbed, causing a steep rise in its level in blood, which is detrimental to diabetics who should avoid sugars in general, and the sweetened products made from them. Honey is formed of equal parts of glucose and fructose. Its deleterious effect on diabetics is the same as any refined sugar, since it contains no fiber and provokes sudden rises in blood glucose level.

MEAT: Eating a great deal of meat is associated with higher risk of diabetes.

MILK: Several studies have shown that infants fed with cow’s milk show a greater tendency to type 1diabetes (insulin-dependent). Diabetics should reduce milk consumption as a simple precaution. There is no scientific evidence that non-fat or low-fat dairy products present any threat to diabetics.

ALCOHOLIC BEVERAGES: Alcohol makes the body’s cells more resistant to insulin, worsening the course of diabetes. It also contributes to the degeneration of peripheral nerves (neuropathy), which is one of the complications of diabetics.

SALT: Consistently consuming more than the ADI (Admissible Daily Intake) of 6g, the possibility of the hypertension, to which diabetics are particularly susceptible, is increased. Hypertension contributes to the cardiovascular complications of diabetes.